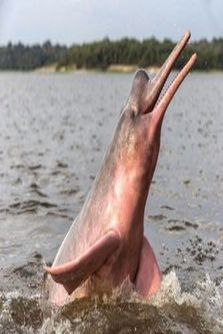 Pink dolphins, called “botos”, and grey dolphins, “tucuxi”, roam the waters of the Amazon. The pink of this freshwater mammal depends on its age and its coloring would be due to a dense and very superficial blood network.

According to the legend, the boto transforms into a man at night to seduce the most beautiful girl of the ball. If the girl becomes pregnant, the boy would become a dolphin again and would disappear into the river. The girl would not be blamed, “it’s the boto’s fault…”. The legend still runs, and many hassles are thus avoided when the father is unknown.

But other legends, as beautiful as unknown, concern the Amazonian dolphins, real lords of the waters, in the flooded forest.